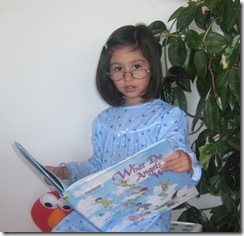 Is Rochelle a four year old phenomenon of children’s literature, or just a kid with a vivid imagination?  Probably the latter, but either way, you may enjoy the stories and poems that she composed for her mother.

A Poem for Mommy

And so are you

The Happy and Sad Party

There was once a little girl. Her name was Tracy. It’s Tracy’s sleepover party. The best part for her is making new friends and making music. The instrument that she likes to play is her drum. She has lots of books too. Her mom’s real name is Angthra and her big sister’s name is Thruta. Someone spoiled the party.  It was Tracy’s little sister. She opened the water and spilled it and that’s not good because it made a big mess. Then everybody went home without presents. They did not even taste the cake that Tracy’s mom baked. There was no sleepover party.

There was once a scared boy. His name was Wayne. Twinkle was not scared. Wayne was scared of Jack the Snake. Twinkle got an idea. She said, “I know, I know, I know!  Jack can put on a helmet and ride a bicycle.” Wayne said, “That’s not a great idea.” Twinkle said,” I have another idea; we can feed Jack the Snake when he is hungry.” Wayne said, “I give up; maybe it will be okay.”  “Let’s try it”, says Twinkle. Wayne said, “Okay”.  Twinkle got a basket of food. They threw the food to Jack the Snake and he ate it all. “The food was yummy,” said Jack and he said thank you. Jack the Snake said, “Now I can go play with a balloon. He bounced and bounced until he flew away in the air. Jack the Snake said, “Help!  I need to get down.  Please help! You need to help me down before I go far, far away.” Twinkle and Wayne used pogo sticks to reach Jack. Twinkle caught Jack but she needed more weight, so she yelled to Wayne for help. Then Wayne reached them but they spun around and around until they get down safely. Jack said, “That was a fun ride.” Then Jack looked to see what was going up in the air, it was the balloon. “Oh, no!  How will we get the balloon now,” said Twinkle.  Jack the Snake had an idea; maybe we can use the zippy scooter that bounces. So they rode their zippy bouncy scooter and they zipped and zoomed to catch the balloon.

The Bee that Could Not Fly

Once there was a bee that could not fly. His mom could fly. His daddy was a gladiator. His mom said, “You go outside, go on, don’t be shy.”

But his mom put on his jacket, and said, “Now go out and play. You have to run and run and run until you get your exercise.”

“I’m tired; I want to go inside now,” he said.  “I got a good exercise.” After he got his exercise now he can fly.

I Am a Hungry Bee

Now you should listen with me.

Long ago there was a bee. The bee was hungry. The hungry bee looked around hoping to find some food. She sniffed around and she smelled a yummy food. She thought it was a hamburger, and it was. She munched it and she said, “Ummm. I’m not hungry anymore. I’m going to tell my mommy that there is a hamburger in my tummy.”  She raced to the house and she could fly. But she got a hiccup and that made her fall down. She cried and cried and cried until her mom rushed to her. “You cranky little bee!  Why are you not careful?  Go inside and play with your computer.” The little bee said, “Will that make me feel better?” Her mommy said, “Yes, it may.” She went inside and played with her computer. Then she said, “Mommy, I’m hungry again; I want some bread.” And her mommy gave her a peanut butter and honey sandwich.