As many of my readers may know, my wife Marissa is from the Philippines.  One inter-cultural marriage fact that I learned early on is that when you marry a Filipina, you also marry her family.  Some may see that as a negative, but I don’t, not at all.  I look at it as a direct opportunity to dramatically change lives for the better.

One thing I made very clear to Marissa from very early in our relationship was that although I was happy to help her family and expected that to be a part of our relationship, I was not interested in subsidizing their lifestyle.  I don’t need more dependents than I already have.  So we agreed on a set of guidelines for assistance.  We help with infrastructure, education, and medical emergencies, but not ongoing living expenses or entertainment. 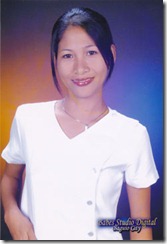 We have chosen to focus our primary efforts on education, particularly when that education can lead to a high paying job abroad.  While it would be good and admirable to work toward improvement within the Philippines, poverty and unemployment are so endemic that it’s very difficult to find opportunities to move up without going abroad.

Our first project was sending younger sister Sheryl to nursing school.  We have been paying her educational and living expenses for a few years now.  She will graduate in May of this year.  And yes, guys, she’s still single. Hard to believe, but true. 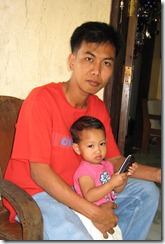 Now we are looking forward to who we can help next.  We have decided to focus on our brother-in-law Reggie.  He is married to Marissa’s younger sister Moneera.  He and Moneera live in Santa Cruz, Ilocos Sur, Philippines, which is in Northern Luzon.  They met in college as they were completing degrees in Education.  Reggie now teaches English and Social Studies at a private high school.

Reggie is well educated, speaks good English, and is generally a very capable guy.  But his salary is around $150 per month.  He and Moneera can’t afford to live on their own, so they live with and support his elderly parents.  They now have two children, so with his parents there are a total of six mouths to feed and a household to maintain, all on only $150 per month. 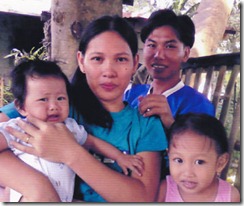 Reggie is unable to afford a car or even a motorcycle, so he either walks or rides a bicycle to work.  They have no medical insurance, so if anybody gets sick, they have to ask for help from relatives in the US to be able to go to the doctor.  They have enough to buy groceries, LP gas for cooking, and basic household supplies and that’s about it.  Family members in the US help out when they can, but in this difficult economy we usually don’t have much to spare.

Although there are other jobs he could potentially get, the pay wouldn’t be that much higher, and the additional cost of living would quite probably exceed any gains.  The only way to make a significant improvement is to work abroad. 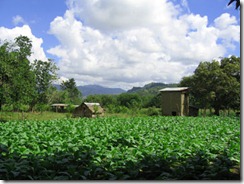 The good news is that there is unfilled demand for teachers in the US, particularly math, science, and special education.  As you might imagine, the challenges of special education often scare off or discourage local candidates. As a result, those positions are difficult to fill.

Marissa and I have met several Filipinos who have obtained employment visas to come to the US for teaching jobs.  We thought that might be an opportunity for Reggie, so we started asking around.  According to the teachers we talked to, the biggest demand is for special education.  We asked Reggie if he was interested in taking on the challenges of teaching special needs kids.  He is very willing to do so, and looks forward to the opportunity.

One of the Filipino teachers that we met was kind enough to tell us what qualifications are required and offered to put in a good word with his employers when they start hiring for next school year.  There are several ways to meet the required qualifications – an undergraduate concentration, a postgraduate certificate, or a Master’s degree.  As Reggie has already finished his undergraduate degree and did not pursue that concentration, the best course for him will be the certificate program.  The Master’s degree would be nice, but it would take quite a bit longer and isn’t required from what we can tell.

We’re still researching the cost.  At this point my estimate is $800-1000 for tuition and $400 for room and board.  Then he’ll have maybe $500 in visa related expenses and $800 or so in travel costs once he gets a job and the visa.  All in all, I estimate that the total cost will be between $2500 and $3000.  That’s a pretty big chunk for Marissa and I to come up with, but when I look at the impact that it will have on his life, it’s worth it.  If he can get even $30K per year in the US, he will be able to support his parents and save to bring over Moneera and his children.

If you found Reggie and Moneera’s story inspiring and would like to help them, please use the donate button below.  They would very much appreciate it.  Even a small amount will have a big impact.